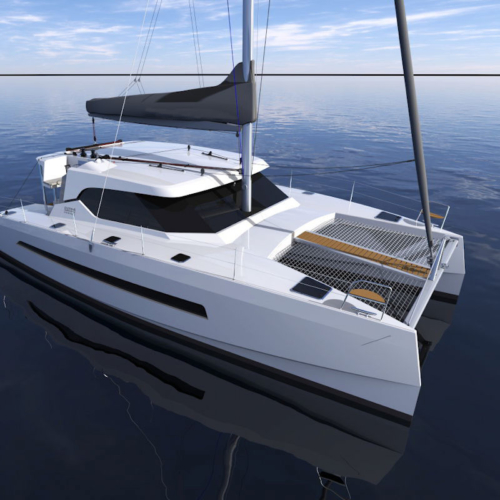 How I became a Moody owner – by accident

How I became a Moody owner – by accident

The story of my Moody life started in November 2017 on a cold and rainy Monday somewhere in Berlin. I was stuck in the middle of the usual chaos on the streets,
waiting in front of red traffic lights. My car smelled like cheese cake, which I had baked the day before for my colleagues – for no particular reason. On this day I wouldn’t actually get to my
office. Not that week and not for a couple of months. This Monday in November 2017 marked the turning point of my former life.

My heart was pumping with the speed of techno song, I sweated, I thought I’m collapsing. It felt like a heart attack, but I knew it was ‚just‘ a panic attack. I was
45 years old, highly stressed and I had ignored the symptoms that something was wrong with me for quite a while. But this day was different. Straight away I went to the doctor. For the next
couple of months I was unable to continue working. And even worse, all I could do was sit in my apartment, I was a prisoner of myself. Barriers everywhere around me, built up in my head. It was
impossible for me to leave my flat. I was suffering from burnout, combined with agoraphobia. Pretty bad for someone who travelled the world for a profession.

At that time I was an editor at the german business magazine ‚Capital‘ based in Berlin. By the way, I hate Berlin. To big. To loud. To aggressive. Previously I had
lived in Hamburg working ten years for the German edition of the ‚Financial Times‘ (FTD), before it was shut down at the end of 2012. The FTD was financially not very successful. Or let’s say: a
financial disaster. For a newspaper that claimed to be ‚financial‘ it was not the best advertisement. I had started as a pagemaker for the political desk, later I was one of three front page
editors, then I became a reporter writing about white collar crime. It was the most intense time of my life, traveling all over the world, hunting for stories in the Middle East, Afghanistan,
Mauritius, New York, London and – reporting about tax evasion – of course in Switzerland.

After moving to Berlin life turned from intense to stressful. I loved my job, but the love was eating me up. In a time of hate speeches about fake news, a shrinking
number of paying readers, smaller budgets, less editors and more output, being a journalist was not that much fun anymore. That was one reason to re-examine my life, the other one was based on
geography. Simply put, Berlin is pretty far away from any seaside. Since I was a child I was used to going sailing. Even if I bought a small sailboat in Berlin, cruising on a lake is different
from sailing offshore.

But I continued landsailing. This is a breathtaking sport, speeding up to 130 km/h on three wheels, powered just by the wind. Every second weekend I drove about
1000 kilometers in my car to participate in regattas at the amazing beaches of Sankt Peter-Ording on the North Sea coast. Because there are only a small amount of freaks doing landsailing in
Germany, it was pretty easy to qualify for the German team and to take part at several European – and World championships – like in France, Belgium, Germany or in Hoylake/England.

Being under sails was freedom to me. All the stress was forgotten. While I was sitting in my flat, alone with myself, I realized, that even after therapy, I would
probably fall back into my old habits. I realized that I needed to change my life. I realized that I had to change myself. But I didn’t know how. I had studied Middle Eastern Studies, I worked
all my life as a journalist. I fail as soon as I try to connect cables or fix a machine. All I did in my lifetime was put words together to make sentences and sentences together to make
paragraphs. But this, I realized, I can do anywhere in the world. Even on a sailboat …

In March I was back in the office. Within the first few hours, I knew what I had to do. To make a long story short, I quit my job, sold my apartment in Berlin,
including all the furniture. Even the pictures on the walls stayed in Berlin as I left at the end of August. All I kept were possesions that would fit in my car. 46 years with all the memories of
my life locked up in Berlin – and left behind.

In the beginning of September a friend and I flew to Turkey to find a boat for me to live on. I know Turkey very well, I’ve stayed a couple of months over there,
even studied in Izmir for one semester. At least ten times I had chartered boats in Turkey. I knew that I liked the country and the people. I knew that I wanted to stay for the winter in Kaş in
the south of Turkey, a most lovely place to be. And of course I knew that in Turkey the living expenses were very low compared to Germany.

I had about ten boats on my shopping list when we arrived in Marmaris. I was interested in about 40 feet for less than 75.000 GBP. The yacht must be a safe vessel,
because most of the time I would be singlehanded or sailing with a friend, and spacious enough to live on. Of course there were two Moodys on my list. But I wasn’t deadlocked on the brand,
because I have never sailed on a Moody before.

The first yacht we looked at was a Moody 38, in good shape, well equipped. But I found the center cockpit a little bit small, especially because in Turkey the
cockpit is the main living area. I liked that solid boat, built in 1994, even it was not the perfect match. But I was pretty sure, not to leave Turkey without buying a boat.

The next day we had a look at a Hunter 45. The yacht should have been in a good shape too. But it turned out that the pictures on the internet had nothing to do
with reality. The yacht was a totally messed up boat with a Russian guy living on it, who was not the owner. He just lived on the boat for whatever reason. And if I remember all the empty
bottles, I am pretty sure this guy had a serious drinking problem.

On the third day we met Hugh, a guy from South Africa, who lived for 1.5 years with his wife on ‚Dilly-Dally‘, a Moody 425 built in 1989. He was anchored in front
of Marmaris. His wife had already left for Hong Kong to visit their son. Their dream to sail around the Mediterranean died because of visa problems with the EU. Hugh, an absolutely lovely guy in
his early sixties, enjoyed showing us his yacht, explaining everything, mentioning problems. Hugh was sad to sell his boat and his dream. But he was looking forward to following his wife to Hong
Kong.

From the first moment I entered Dilly-Dally I felt at home. While I was talking to Hugh, my friend Stephan, who is an author of sailing books, checked every detail
of the boat. After a couple of hours we left Dilly-Dally. Two hours later, after a couple of cold beers and a swim in the pool of the hotel, we decided to cancel the next appointments to
concentrate on the two Moodys. My logic said „Buy the 38“, my heart said „Go for the bigger one“. Stephan tried to reach his friend Michael Schmidt, the founder of German Hanseyacht who bought
Moody a couple of years ago. Stephan knew that Schmidt was sailing in Greece. Maybe he could come to Marmaris to give us his advice. But Schmidt, a crazy rough guy, wasn’t interested in sailing
to Turkey. For political reasons, he said. But his advice was simple: Just buy! Doesn’t matter which Moody.

The next day we met Hugh again for a test sail. It was a lovely day with calm winds. We anchored, dived in the crystal-clear water to have a look at the hull. The
sails where blown out but still okay for the next few months. The engine was pretty new, replaced in 2014. On that evening we signed the contract. I bought Dilly-Dally for 55.000 GBP. Till now
the best decision of my life. The whole process was arranged by Peter from Sunbirdyachts, a british yachtbroker with a small office in Marmaris. I really recommend him.  Peter made
everything easy, arranged all registrations, helped me a lot when I moved onto Dilly-Dally in the beginning of October. And he introduced me to Brian, a British guy who runs Tec-Yachts-Turkey in
Marmaris. Brian and his Turkish colleagues did a fantastic job. They installed very solid davits on my boat including solar panels on top to make Dilly-Dally more independent. By the way Brian
taught me how to maneuver a Moody in a narrow marina. Many thanks for that. The davits are so well made that lots of other sailors tried to copy the construction. But honestly, they all
failed.

Two of my landsailing friends helped me sail from Marmaris to Kaş. It was an unforgetable week with all the weather conditions you can imagine. We had sun and lull,
thunder and storm. We sailed in 40 knots of wind and felt absolutely safe. We anchored in gusts of wind up to 50 knots and felt, well, a little bit nervous. But with every hour trembling in the
storm my trust in the Moody was getting stronger. And we were not disappointed, especially when we saw that some Gulets were thrown onto the rocks by the strong winds.

I have lived on my Moody for four months now, writing some articles for a German sailing magazine, continuing typing my crime-novel. But most of the time I am just
enjoying life. I have met so many fantastic people, we have such a good time, sharing food, drinks and moments. Honestly, there wasn’t one single day where I regretted my decision to sell
everything in Berlin and begin living on a boat. And there wasn’t one single day I wasn’t thankful to live on a Moody. Thanks Dilly-Dally! 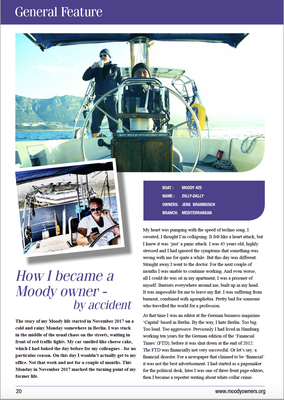 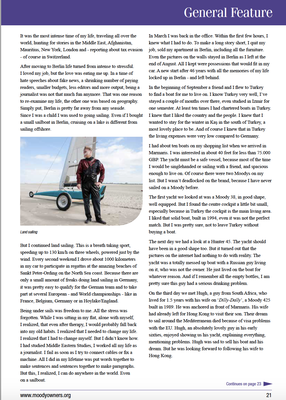 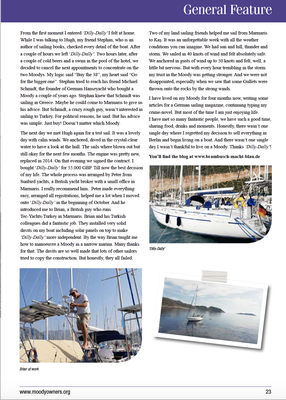 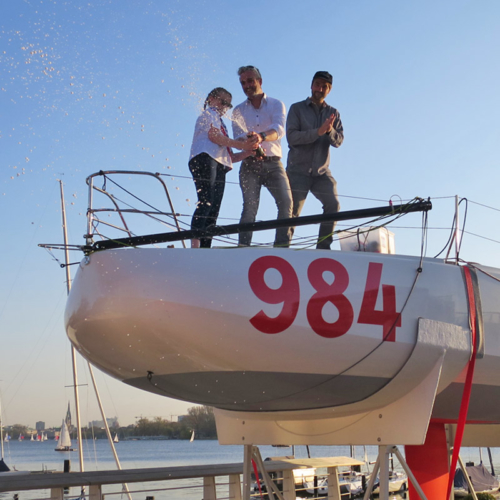